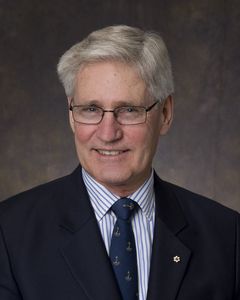 Robin Boadway has had a long and impressive career in economic research, public policy, and the teaching and mentoring of upcoming scholars in the discipline. He grew up in Saskatchewan and attended the Royal Military College of Canada and Oxford (as a Rhodes Scholar), and did his PhD at Queen’s where he taught continuously from 1973 to 2013 and held the Sir Edward Peacock and David Chadwick Smith Chairs in economics. He received numerous awards and honours including being named a Fellow of the Royal Society of Canada (1986), Officer of the Order of Canada (2008), and winner of the Queen Elizabeth II Diamond Jubilee Medal (2012).

Boadway has authored 30 books, monographs and edited volumes, including several leading textbooks. The latter include Public Sector Economics (with D.E. Wildasin), Welfare Economics (with N. Bruce), and Principles of Micro-Economics and Macro-Economics and the Canadian Economy (with J.E. Stiglitz). Many of his monographs are also standard references in the field, including Canadian Tax Policy (with H. M. Kitchen), Intergovernmental Fiscal Relations in Canada (with P.A.R. Hobson), Fiscal Federalism: Principles and Practices (with Anwar Shah), and From Optimal Tax Theory to Tax Policy.

Boadway’s research papers number over 250 and have had major effects on core theory, applied theory and fundamental policy analysis in the field of public economics. Among his most influential studies in the core theory of taxes, transfers and public expenditures are: “The Welfare Foundation of Cost-Benefit Analysis” (EJ, 1974), “Cost-Benefit Rules in General Equilibrium” (REStud, 1975), “Integrating Equity and Efficiency in Applied Welfare Economics” (QJE, 1978), “Long-Run Tax Incidence: A Comparative Dynamic Approach (REStud, 1979), “On the Method of Taxation and the Provision of Local Public Goods” (AER, 1982), “The Role and Design of the Corporate Income Tax” (Scand.JEc, 1984, with N. Bruce and J.M. Mintz), “Problems with Integrating Corporate and Personal Taxes in an Open Economy” (JPubE, 1992, with N. Bruce), “Agency and the Design of Welfare Systems” (JPubE, 1999, with N. Marceau and M. Sato), “Optimal Tax Design and Enforcement with an Informal Sector” (AEJ: Ec Policy, 2009, with M. Sato), and “Optimal Income Taxation and the Labour Market: An Overview” (CESifo Ec Stud, 2013, with J.F. Tremblay).

Boadway has made extensive contributions to the applied theory of public economies, including studies such as: “Taxes and Savings in Canada” (ECC, 1988, with C.M. Beach and N. Bruce), “The Efficiency Basis for Regional Employment Policy” (CJE, 1981, with F.R. Flatters), “Taxation, Inflation and the Effective Marginal Tax Rate on Capital in Canada” (CJE, 1984, with N. Bruce and J.M. Mintz), “Taxation and Savings: A Survey” (Fiscal Stud, 1994, with D. Wildasin), “Efficiency and the Optimal Direction of Federal-State Transfers” (Int T & Pub Fin, 1996, with M. Keen), “The Theory and Practice of Equalization” (CESifo Ec Stud, 2004), “Principles of Cost-Benefit Analysis” (Pub Pol Rev, 2006), and “The Principles and Practice of Federalism: Lessons for the EU?” (Sw Ec Pol Rev, 2006).

Boadway wrote numerous policy analysis reports for Canadian organizations and world agencies and excelled at insightful survey pieces. Among such studies are major reports on: “Taxes on Capital Income in Canada: Analysis and Policy” (1987, with N. Bruce and J.M. Mintz), “Federal-Provincial Transfers in Canada” (1986), “Economic Dimensions of Constitutional Change: A Survey of the Issues” (1991, with D. Purvis and J-F Wen), “Perspectives on the Role of Investment Incentives in Developing Countries” (1995, with A. Shah), “The Economics of Equalization: An Overview” (1998), “Redistribution” (2000, with M. Keen), “Taxation of Wealth and Wealth Transfers” (2010, with E. Chamberlin and C. Emmerson), “Efficiency, Equity, and the Allocation of Resource Rents” (1982, with F.R. Flatters), “The Government Provision of ‘Private Goods’ in a Second-Best Economy” (1994, with N. Bruce), “Indirect Taxes and Investment Incentives in Malaysia” (1995, with D. Chua and F. Flatters), “The Design of Employment Insurance in a Federation” (2012, with J.-D. Garon), and “Evaluating Public Pensions” (1998, with K. Cuff).

Robin Boadway has also made remarkable contributions to academic citizenship. He has delivered about 60 invited public lectures or graduate lecture series. He has twice served as Head of the Queen’s Economic Department, been editor for three different academic journals (including the CJE), and has sat on twelve editorial boards (including the AER and the AEJ:EP). He served as President of the Canadian Economics Association (1996-97) and the International Institute of Public Finance (2009-12). And he has supervised more than ten percent of all PhDs produced by the Queen’s Economics Department. The CEA recognizes Robin Boadway with its highest honour as a Fellow of the Canadian Economics Association.