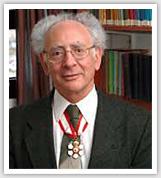 Samuel Hollander, University Professor Emeritus at the University of Toronto, is one of the two Fellows of the Canadian Economics Association elected in 2015, the highest honour awarded by the Association in recognition of a lifetime of distinguished contribution to economics in Canada.

Professor Hollander, an outstanding scholar and teacher of the history of economic thought, is a Fellow of the Royal Society of Canada and an Officer of the Order of Canada, and was the Harold A. Innis Lecturer of the Canadian Economics Association in 1982. A graduate of the London School of Economics and of Princeton University, his Princeton PhD dissertation was published as The Sources of Increased Efficiency: A Study of DuPont Rayon Plants (MIT Press, 1965).

In the history of economic thought, he has published Classical Economics (Blackwell, 1987) and four volumes of Collected Essays (Routledge, 1995 to 2013), and major studies of The Economics of Adam Smith (U. of Toronto Press and Heinemann, 1973), The Economics of David Ricardo (U. of Toronto Press and Heinemann, 1979), The Economics of John Stuart Mill (2 volumes, U. of Toronto Press and Blackwell, 1985), Jean-Baptiste Say and the Classical Canon in Economics: The British Connection in French Classicism (Routledge, 2005), The Economics of Karl Marx (Cambridge University Press, 2008), Friedrich Engels and Marxian Political Economy (Cambridge University Press, 2011), and, most recently, John Stuart Mill: Political Economist (World Scientific, 2015). Taken together, his Studies in Classical Economics provide a brilliant, challenging, and massively documented reinterpretation of the central figures and writings of classical economics (including the writings of his distant cousin Karl Marx) and their relationship to neoclassical economics.